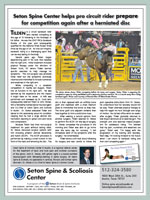 Several years ago Tilden began experiencing pain in his neck that radiated into his right arm. Initial treatment included physical therapy under the direction of Shawn Scott, DC where Tilden learned specific exercises to help manage his symptoms. The non-surgical care provided initial relief but the symptoms eventually returned and intensified to include numbness and weakness in the right arm.

Because Tilden had tried non-surgical treatment for years without lasting relief, Dr. Stokes discussed surgical options with him including anterior cervical discectomy and fusion (ACDF). The ACDF procedure is performed by making a small incision in the front of the neck and removing the disc. The disc is then replaced with an artificial bone graft and stabilized with a small titanium plate to immobilize the bones as they heal. The bone graft and adjacent vertebra then fuse together to form a solid bone mass.

After seeking a second opinion from another surgeon, Tilden selected Dr. Stokes to perform the ACDF. On the day of surgery, Dr. Stokes completed the procedure in the morning and Tilden was able to go home later the same day for recovery. “I felt immediate relief of my symptoms after the surgery,” he remembered.

Tilden wore a soft neck brace following his surgery and was careful to follow the post operative instructions from Dr. Stokes. He understood that full recovery would not be easy. Tilden attended physical therapy to help him regain his neck strength and range of motion. He started office work six weeks after surgery. Tilden gradually returned to low impact workouts at an exercise gym. The strength and core exercises helped prepare him for saddleback riding. “I’m relieved that my pain, numbness and weakness are gone,” Tilden said. “I’m happy with the progression of my training and recovery. Next step, I’m looking forward to the future when I can return to bareback riding and then start competing again.”

Have you been told you need spine surgery?

John Stokes, MD at Texas Spine and Scoliosis can provide a second opinion that may determine if you need spine surgery or if there is a nonsurgical treatment option that may relieve your symptoms. You may qualify for a simple procedure that can get you home later the same day. Request an appointment online or call: (512) 324-3580.